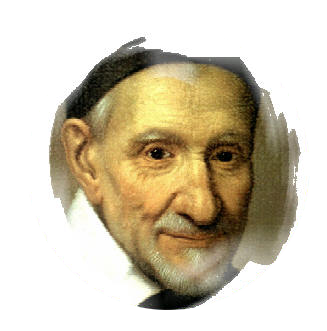 Vincent de Paul was born the son of a farmer in 1581 at Pouy (now the village of St Vincent de Paul) near Dax in the Gascony region of the South of France. He was ordained a Priest in the year 1600. Only gradually in his thirties did he come to an understanding of how God was calling him.

Ambition was a part of his life as a young priest - the need for a position in the Church to provide security for himself and his family. Yet something happened that caused a change in his life.

Vincent came to acknowledge God's call to serve the poor when he became the pastor of a parish church in 1612. The poor people of the parish of Clichy (just outside Paris, France) so affected him that he became conscious of a desire to help these abandoned people in the country regain their faith in God.

On January 25, 1617, the Feast of the Conversion of St Paul, Vincent preached a Mission Sermon in the village of Folleville in northern France. He always regarded this occasion as the beginning of the Congregation of the Mission. In 1625, at the insistence of the rich Madame de Gondi, he formally set up the Congregation of the Mission, a Community of Priests and Brothers, to give Missions to the poor people in the country and to form Priests in France and elsewhere. This community is known in Australia as the 'Vincentian Fathers and Brothers'.In 1633 he assisted Louise de Marillac in the founding of the 'Daughters of Charity', a community of women who would live in community without religious habits and who would look after the sick poor.

This community is very active in Australia and many other parts of the world today.During his long life (he died at the age of 79), Vincent organised missions to country people, was heavily involved in the education and formation of Priests, engaged in and organised many charitable activities, and influenced for good many people in powerful positions in the government of the country. His driving force was embodied in the Gospel text "He sent me to preach the Good News to the Poor" (Lk 4:18). This text, rendered in Latin as "Evangelizare pauperibus misit me", is the official motto of Vincentians.

Vincent de Paul did not develop a 'Spirituality' in the ordinary sense of the term. Rather, he followed the Spirituality of the Church, and in order to make this Spirituality available to all he developed what is now referred to as his 'Way'.

He is remembered in Australia and Fiji today especially by the Daughters of Charity, the Vincentian Priests and Brothers, and the St Vincent de Paul Society. The St Vincent de Paul Society was founded in France by Frederic Ozanam, a young university student, two hundred years after the time of Vincent himself. This Society, a lay organisation, is often known in Australia simply as 'Vinnies'. It provides much needed care for the poor and marginalised of our own time.